This week is all about protecting and supporting the great British butterfly. Read on to find out more about these amazing creatures and how you can help researchers by getting involved in the Big Butterfly Count 2018.

Butterflies are both beautiful and vital for maintaining a healthy natural world. They are thought to have evolved from moths around 55–56 million years ago. Worldwide, there are around 18,500 different species of butterfly and around 70 of these live in the UK.

They play an important role as pollinators, fluttering between plants to spread pollen and complete the reproductive cycle. Butterflies, alongside bees and other pollinators, are responsible for pollinating 84% of EU crops—and that’s just one statistic out of the many that highlight the importance of butterflies.

They are also indicators of a healthy ecosystem and their decline is a worrying signal for the future of our native plants and wildlife.

For comparison, 35,000 more butterflies were counted by 8,000 fewer people in 2015. The destruction of habitats and climate change have been cited as some of the major causes of butterfly decline in the UK.

This worrying trend only highlights the need for more of you to get involved in the count and do what you can to support our British butterflies. So, to help get you started, here is some information about the Big Butterfly Count and a list of some of the most endangered species to look out for when butterfly spotting, as well as some butterfly-friendly plants that you can grow in your garden.

What is the Big Butterfly Count?

The Big Butterfly Count which takes place from 20th July to 12th August, is a UK nationwide survey aimed at helping to assess the state of our butterfly population and the health of our environment. It was launched in 2010 and has rapidly become the world’s biggest survey of butterflies. www.bigbutterflycount.org 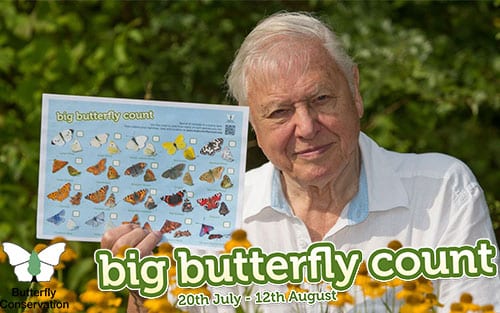 “You can play a vital role in the battle to secure their future. By taking part in the Big Butterfly Count you will be providing important information that could help turn their fortunes around.” – Sir David Attenborough

How to take part

With the free smartphone big butterfly count app, you can carry out and submit your count all in one go while out and about watching butterflies. Now available for iOS and Android. You can also download and print out our handy identification chart to help you work out which butterflies you have seen.

Simply count butterflies for 15 minutes during bright (preferably sunny) weather. Records are welcome from anywhere: from parks, school grounds and gardens, to fields and forests.

You can also send in your sightings online at www.bigbutterflycount.org if you don’t have access to the big butterfly count smartphone app.

This is a spectacular woodland butterfly. Its white-banded black wings and distinctive delicate flight set it apart. The White Admiral is widespread in southern England, extending just into Wales and northwards. It could be confused with the larger Purple Emperor. Adults are often found nectaring on Bramble flowers in rides and clearings. It is a fairly shade-tolerant butterfly, flying in dappled sunlight to lay eggs on Honeysuckle.

The White Admiral occurs widely in southern Britain and has spread rapidly since the 1920s, after an earlier contraction. However, population monitoring has shown a dramatic decline in the last 20 years, for reasons that are as yet unclear.

This small, springtime butterfly that loves scrubby grassland and sunny woodland clearings is sadly one of the most rapidly declining butterflies in the UK. Small and orange and brown, like a tiny fritillary. Undersides of hind wings have rows of white spots. You will rarely see adults visit flowers. Most sightings are of the territorial males as they perch on a prominent leaf at the edge of scrub.

The Duke of Burgundy is found in England only with a stronghold in central-southern areas and more isolated colonies in the southern Lake District and the North York Moors.

The Adonis Blue is one of the most characteristic species of southern chalk downland, where it flies low over shortly grazed turf. Though its distribution is limited, this butterfly can be seen in many hundreds on good sites. The males have brilliant sky-blue wings, while the females are brown and far less conspicuous.

Both sexes have distinctive black lines that enter or cross the white fringes to the wings.

It has undergone a major decline through its entire range, but has recently re-expanded in some regions.

The Black Hairstreak butterfly is one of Britain’s most elusive butterfly species. It is found only in the Blackthorn thickets of woodlands on heavy clay soils between Oxford and Peterborough in the East Midlands of England.

The Black Hairstreak spend nearly all their time in the canopies of trees of dense scrub where they feed on honeydew secreted by aphids. They spend very little time in flight, but at certain times they make short looping flights in and out of the tree tops with a peak of activity around midday.

The adults are easy to confuse with those of the White-letter Hairstreak and Purple Hairstreak which fly at the same time of year, care is needed to confirm identification of the underside marking, which has a row of black spots in the outer orange marking and may have a white ‘W’.

The Black Hairstreak has unfortunately declined steadily during the twentieth century and is now reduced to around 50 sites.

The Black-veined moth is a protected species now only found in some parts of Kent.

It flies during the day, especially in sunshine, and frequents rough downland, pastures and similar grassy places.

Overwinters as a larva, becoming fully fed in May, and can be seen from late May to early July.

The white or cream wings have black veins and blackish banding on the underside of the wings. When at rest the wings are held flat but sometimes when feeding or temporarily resting at flowers the wings can be closed or partly closed over its back like a butterfly.

This small, fast-flying butterfly is now restricted to damp grassy habitats in western Scotland. With beautiful gold and brown checked wings, males are seen more frequently than females, perching in sheltered positions either next to wood edges or amongst light scrub or bracken. They dart out to defend their territory or spot mates. Females are notably less conspicuous and tend to fly low among grasses when egg-laying.

The Chequered Skipper had actually died out in England in 1976 and re-establishment trials have taken place since 1990 to reverse this tragedy. In Scotland, there are thought to be about ten core areas and there have been no obvious recent changes in range.

Easily mistaken for a moth, this small brown and grey butterfly is extremely well camouflaged on the bare ground where it likes to sit.The Dingy Skipper is found in Britain and Ireland but becoming increasingly rare. A small butterfly with low, darting flight, it has grey-brown wings with mottled brown markings and two rows of small white spots. Grizzled Skipper is similar in size but has brighter black and white markings.

In sunshine, the Dingy Skipper often basks on bare ground with wings spread wide. In dull weather, and at night, it perches on the tops of dead flowerheads in a moth-like fashion with wings curved in a position not seen in any other British butterfly. The Dingy Skipper is locally distributed throughout Britain and Ireland, but has declined seriously in recent years.

Found throughout England and Wales but becoming increasingly rare, the Grizzled Skipper is a small, springtime butterfly with a striking black and white appearance. It loves southern chalk downland and other sparsely vegetated habitats across southern England, commonly in small colonies, but has declined in several regions. In Wales it is restricted to the south coast and post-industrial sites in the north east.

With wings of black or dark brown with checker-board of white spots, it is a low-flying, darting butterfly. Dingy Skipper is similar in size but with much duller wings. Its rapid, buzzing flight can make it difficult to follow, but it stops regularly either to perch on a prominent twig or to feed on flowers.

The Marsh Fritillary was once widespread in Britain and Ireland but has declined severely over the twentieth century.

The Marsh Fritillary populations are highly volatile and the species requires extensive habitats or habitat networks for its long term survival. It is now confined to the western side of Britain and Ireland.

The checked wings of this lovely butterfly are more colourful and brightly patterned than any of our other fritillaries, with more heavily marked races being found in Scotland and Ireland. The larvae spin conspicuous webs that can easily be recorded in late summer.

This small butterfly has a silvery appearance as it flies low to the ground over sheltered flowery grasslands. This beautiful species is brown with a row of orange spots on outer wing edges, sometimes with white spot on for-wing.

In Britain and mainland Europe, the pattern of wing spots is highly variable and many local races (and sub-species) have been described.

In Scotland, most individuals are of the race Artaxerxes and have a characteristic white spot in the middle of the fore-wing. In northern England, this spot is generally dark brown or black. It is similar to Brown Argus but differentiated by orange spots. The butterfly occurs mainly as small, scattered colonies and has declined in northern England.

This stunning and rare butterfly is confined to small colonies in England and Wales. This small butterfly is found mainly in heath land where the silvery-blue wings of the males provide a marvellous sight as they fly low over the heather. The females are brown and far less conspicuous but, like the male, have distinct metallic spots on the hind-wing. In late afternoon the adults often congregate to roost on sheltered bushes or grass tussocks.

Males are blue with a dark border and silvery edge. Females are brown with a row of red spots. Undersides of both are brown-grey with black spots, a row of orange spots, and small greenish flecks on outer margin. The Silver-studded Blue has a restricted distribution but occurs in large numbers in suitable heath land and coastal habitats. However, it has undergone a major decline through most of its range.

While some species of butterfly have suffered during recent years, a few have actually flourished, partially due to the warm weather we have been experiencing. A few such butterflies are:

These butterflies are thriving because they are not limited to one type of habitat and are able to survive a wider range of conditions. While this is good news, we must not forget the other species of butterfly, especially the rare and endangered species which continue to suffer with every passing year.

For more great ideas, check out these flowers for seasonal colour in July: