The CWGC Centenary Garden – The Arch

The 23,000 cemeteries and memorials that the CWGC maintain across the globe vary greatly in size, but they are all cared for with the same level of dignity, care, and respect that the organisation is famous for. 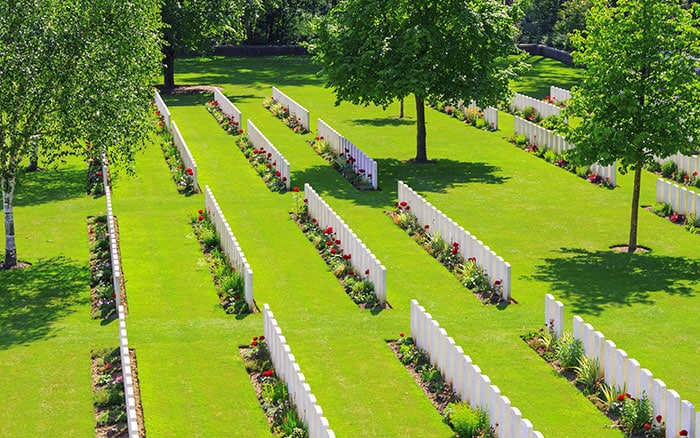 The smallest cemetery on Ocracoke Island in North Carolina, USA holds only four graves; the great CWGC Tyne Cot Cemetery in Belgium holds almost 12,000; and the incredible Thiepval Memorial in France stands over 45 metres high and carries the names of over 72,000 casualties from the Battle of the Somme with no known grave.

The commission spends £65 million a year maintaining each and every grave in perfect condition. It employs engravers, stonemasons, blacksmiths, and gardeners.

In creating this garden I wanted to capture the intimate solitude of a small cemetery, and I did this through the design of the interior of the garden, which raises you up into the tree canopy for quiet seclusion and reflection.

But I also wanted to reflect some of the breath-taking grandeur of the larger sites.

So, following an inspirational visit to some of the CWGC’s sites in France and Belgium we designed a beautiful arched entrance in the shape of a wreath – a symbol that carries a great deal of meaning for the Commission.

The laurel wreath symbolises both victory and remembrance. It forms part of the CWGC crest, as well as the badge they have created for their centenary this year. However, the wreath design we used for the basis of the arched gate is based upon the great bronze wreath displayed at CWGC Tyne Cot Cemetery in Belgium.

Tyne Cot site is centred around a number of fortified German bunkers – known as pill boxes – that stood west of the level crossing on the Passchendaele-Broodseinde road during the First World War.

They were part of the German defence positions of the Third Battle of Ypres, also known as Passchendaele. The largest of these pill boxes forms the central point of the cemetery, with graves fanning out from it towards a great memorial wall.

When King George V visited the cemetery in 1922 he suggested that the Cross of Sacrifice be built above the pill box. Below that cross, set into the stone, is a large laurel wreath made of bronze; it’s this wreath, with a crown set at its apex, which inspired the design of our arched gate.

The arch is made from polyester resin on a wood and metal frame and was hand painted to resemble aged metal.

It was hand made by brothers Danny and Yves Delplace with support from Kurt Talloen, who worked on creating the structure of the entrance arch. All three work in the CWGC workshops in Belgium – just three of the many skilled artisans and craftspeople the CWGC employs.