Welcome to my Behind-The-Scenes Diary from the set of Love Your Garden Season 7, where each week I will be sharing fun pictures, videos and stories of what we have all been getting up to while filming Britain’s most loved gardening show.

Each week a blog will be released as soon as the show is finished, which airs at 8pm on ITV1. Hope you enjoy! 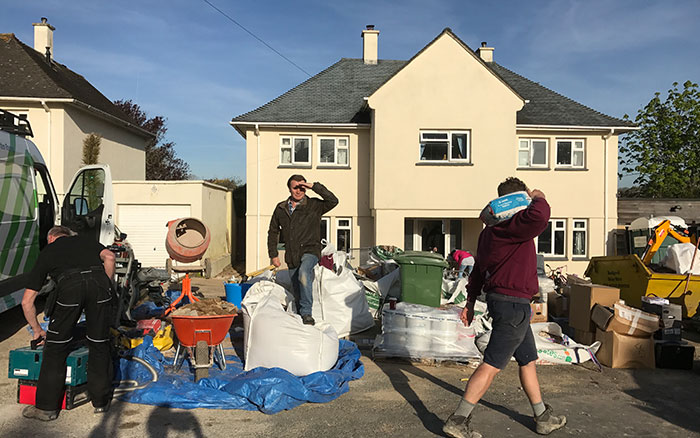 In this first shot you can see me standing tall on a bulk bag at the front of the garden, while around me all of the deliveries are arriving on site for the first episode of Love Your Garden 2017. As you can see, everything is taking place in readiness for the start of another great year with more incredible gardens.

Next picture is of Frances arriving, looking like a Hollywood movie star from the silver screen, nonchalantly relaxing in her coat and shades with a takeaway coffee. How chic.

Here’s Katie and I, and you can tell it’s the beginning of the season as there are no leaves on the trees behind and we’re both wearing coats! It’s a stark contrast to the weather today where I am on site filming another episode of LYG during this June heatwave.

I took this shot when I arrived early one morning. We usually get paper or plastic cups, not china, but because I was here early some of the family cups are hanging about. I had to choose this one and send a pic home because both of my daughters are massive Frozen fans. Of course, their reply was that they want some of these cups. So if anyone knows where to find some, I’m on the lookout…

Haha, this is a brilliant shot of ‘Eddie The Eagle’. Instead of putting the roofing cover over the hot tub like he should be, he’s here with his mask on getting in position as if he is just going off on the piste. And when he finished that job that’s exactly where he went.

Here we have Steve and Chris our sound men. They look as if they are mixing something on a nightclub mixing desk, but they’re not. They’re just syncing their equipment. And no, that’s not a euphemism.

Next we see the Royal Marines’ motif created as a sophisticated garden ornament for the family. This was marvellous work by Lee and the team at Decori who created it; they really outdid themselves, I think you will agree.

While there is loads of hard work going on in the background installing the sculpture with Alan supervising, our director Natalie and lead cameraman Steve are in deep discussion.

This is Frances and I with our series producer, Colin, who’s the real boss around here and a great guy.

The owner of one of the nurseries that delivered plants to us came over to help out, and he brought his daughter. They were absolutely lovely, and here you can see Katie and I spending some time with them.

Our head of production, Paul, is a brilliant guy, and he pulls most of the items together, ordering all of the products and getting everything in. He usually works alternate shows with Thea, but this was his last show. Sorry to see him go, but he’s going to take up a big job with the Parks Department in Bath, so best of luck to him!

Next you can see Alan getting ready to put in some of the big palms. We put a lot of palms into that garden, and I must say it really worked. The finished look was spectacular.

There’s a shot of some of the marines that were in and helping. These guys were fantastic, and they did a sterling job.  They really threw themselves into the production, and it was a privilege to work with them.

One more group shot of us all together as we are coming close to finishing the garden.

Here is me with Anthony, the owner of Berry Landscapes, who have been a phenomenal help. They were all very professional, hard-working guys on this shoot, and I thoroughly enjoyed working with them.

You can see Katie doing some planting here. The end is nigh at this point, but there were still more palms to go in!

This is the outdoor cooler box that we installed. Cor, those look tasty now! It is always a great addition to have coolers in the garden to save you running back and forth to the kitchen on hot days in the garden with friends and family.

And here is the quartet, all smiles as we have just finished the garden.

What a marvellous garden, and what an honour it was to create something for this hero. We had tremendous fun in putting it together, as always! Stay tuned for the next episode!