How does frost impact the lawn in the garden?

Come winter, it may be a lovely sight to see the frosted white tips of the lawn from the comfort of your living room. But this may be slightly unwelcome if you’ve not long carried out your autumn lawn care and sowed any seeds.

You’ll be glad to know that frost on the lawn may not damage the grass. However, if it’s frozen and is walked, this can have adverse effects. Therefore, it’s ideal to keep an eye on any wandering pets in the frost, as trampling on frozen grass can cause issues. Walking on frozen grass causes the leaf cells to rupture. Then, once the grass has thawed, you may be able to see footprints (or pawprints) of the areas that have been trodden.

There are a couple of other things to avoid when the grass is frozen. It may seem obvious, but don’t mow the grass when it’s frozen.

Similarly, in frosty conditions it’s not the time to apply any fertiliser, weed control, or lawn treatments. Instead, stick to doing this in spring and autumn when the conditions are right for the task at hand. 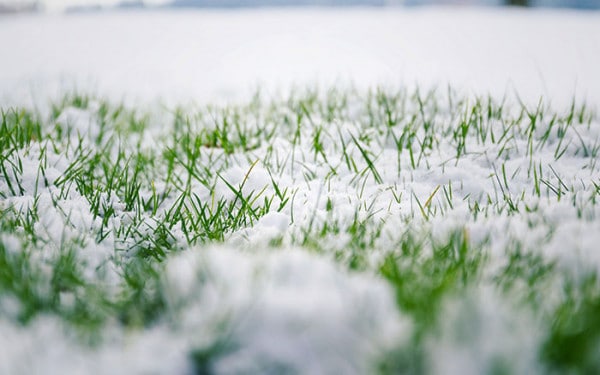 Cool air is heavy and will sink to the ground. A still night allows cold air to pool near the ground uninterrupted. This can cause temperatures to fall at ground level, causing a frost. Wind is a great tool to help disperse pockets of cold air—which is why frosts only tend to occur on still evenings.

Mixing the lower part of our atmosphere, wind prevents ground temperatures from plummeting. It does this by bringing in warmer air from other locations or even from the upper atmosphere.

Where am I most likely to be impacted?

Around the UK, the climate is quite similar compared to extremes of other countries. However, there are some regions that are more prone to frost than others. Research by The Grass People has shown the maximum potential length of frost for various locations around the UK.

For example, Shrewsbury is top of the list with 211 maximum potential days of frost, followed by Edinburgh with 201, and then Guildford and Kilmarnock with 200.

On the other end of the spectrum is Kensington, Harringay, Hackney, Enfield and Camden with 79 potential days, showing that London has significantly less chance of frost.

Although the number of days varies depending on location, this doesn’t necessarily mean the lawns in the latter locations are less prone to frost damage.

One of the key things to preventing frost damage is to ensure the right care is being given to the lawn for the rest of the year. Applying a suitable fertiliser in spring that’s high in nitrogen and then applying Miracle-Gro® EverGreen® Autumn Lawn Care between September and November to protect the lawn from harsh winter weather so it’s ready to bounce back in spring. If the lawn doesn’t get the right nutrients, it won’t have what it needs to fend off diseases.

It helps to look ahead when mowing the lawn. Plan the last mow of the year before the risk of frost sets in, and don’t mow too low. Cutting the grass too short before the frosts of winter can increase the likelihood of the grass having trouble repairing and growing again.

That’s how frost can impact the lawn, but there are steps to take to reduce the likelihood of frost damage. From giving your lawn the best care for the rest of the year, it’ll be in good stead to bounce back after winter.