Series five of ITV’s Love Your Garden with Alan Titchmarsh has finished for this year.

Here are my photo highlights from the show. Catch up with all the episodes and photos here! 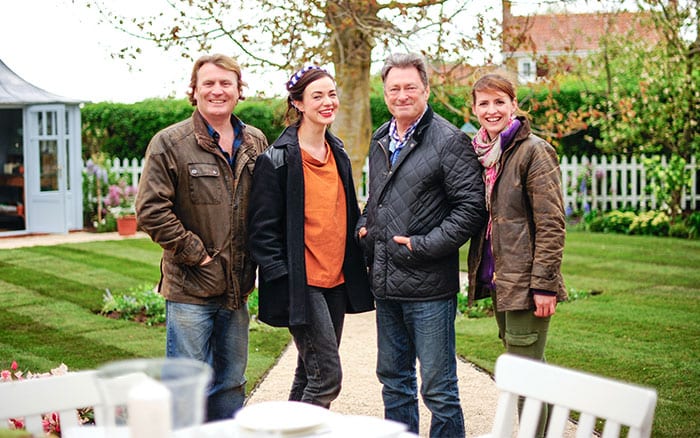 Celebrating in the finished garden with Enid and Robbie, episode 7.

Enjoying the sun on the bench made from a car’s front end, episode 4.

David and Alan take a selfie.

Alan Titchmarsh enjoys being king of the castle… um, garden.

Katie sneaks up on David during the wildlife special.

Everyone gathers for a team photo on the last episode with Rachel, Andy and their family.

David apologises to a guest after the champagne cork from his bottle hits her on the head.

Tam is told off by soundman Matt for putting up a wind chime. His microphone was picking up the tinkling.

Alan Titchmarsh gives head of production Jim a nudge with a garden fork to move him out of the way as he takes photos during the wildlife special.

David and Katie relax on set after the hard work is done.

Sam, Kevin and Sam test out the hanging bed feature from episode 8.

The view from the other side – cameraman Stef, soundman Matt and director Natalie line up a shot.

David and the team get wet in a sudden downpour.

Alan joins in with some Bollywood dancing in episode 5.

Katie hides in a huge terracotta pot to surprise Alan.

David and Frances test out some cool sunglasses.

The Frosts Landscapes team have a well-earned glass of champagne while producer-director Will gives Matt bunny ears.

David and series producer Colin get dressed up to visit The Ritz for container garden inspiration.

Katie and Frances get dressed up and hand out sweet treats at the garden afterparty in episode 5.