Love Your Garden series 4 episode 5: Behind the scenes photos 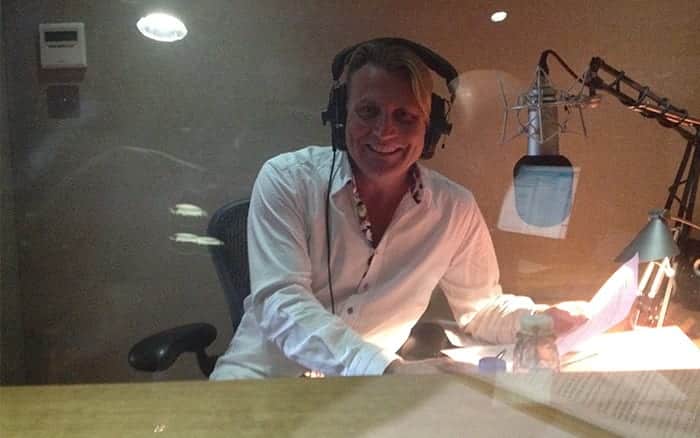 When you hear my disembodied voice on the show saying “and now we’re doing this or going there”, it’s actually a voiceover that’s recorded separately to the filming. I go down to London regularly to record it in a studio near Oxford Circus.

This is a picture taken through a wooden pallet. We are on location at Capel Manor College near Enfield, and Frances and I are making furniture out of old pallets. It was a tough day because it rained on and off, but we had great fun creating a table and some planters from recycled wood.

As usual when we are on site, it poured down with rain in between takes and the team had to seek cover! Here is Frances, wet and freezing cold, using her coat as last resort to keep herself dry.

Back on the main garden site, here is Matt and Grant, our two sound guys, who are posing for the camera. They’ve known each other for years and worked together on loads of projects. Now by chance, they have ended up together on Love Your Garden!

Here is Guy painting a fence panel, and it looks like some cheeky seagulls have been using his back as a toilet! We’re by the seaside in Devon, and the birds are everywhere. Actually it’s just splashes of paint – well that’s what he says, anyway!

Here is Alice, our director and Max, our associate producer having lunch. They are using the only furniture available to rest for their ‘sit-down meal’. Meanwhile, I’m sitting in the gutter by the side of the road! Apparently there weren’t enough wheelbarrows for us all to use as chairs, and they got them first, the lucky things!

This is a group shot of the lads from Frosts Landscapes. From left to right we have Jon, Kevin, Sam, Shaun and Matt. They are having a well-deserved rest after a particularly strenuous makeover in quite hot conditions.

Here is Martyn lying down having a kip. He’s the chief carpenter at the show, and he works really hard, but every now and again he needs to have a little rest!

This is Martyn’s warpaint, when he’s got suncream under his eyes and on his nose. He says this is to protect him from being stung by a wasp!

Here is a picture of my painted glass bottle. Each of the presenters had to paint one to put in the garden.

I painted poppies in a field, using two colours of green with red flowers – I didn’t think it looked too bad actually!

Here I am at the top of the bank where I had to plant the trees to hide the power station. It was hard work getting up there, never mind digging up all the mud and stones that were in there! It was very hot that day and I wore quite a thick shirt, so I was sweltering.

…when I managed to get a photo for you guys of what I could see! I was looking out over the garden, watching everyone else at work.

Poor Frances – whenever I seem to look at her, she’s always got a spade in her hand and is digging over border after border! Here she is preparing this one for the plants that are due to go in.

Katie drew the short straw and ended up painting all of those oil drums to put in the garden as planters. When they were in position, it looked to me more like the funnels off a ship than the French flag!

These lads were from Cool Canvas, and they were a brilliant help. They put in a lot of the children’s play area and the walkthrough, but they stayed an extra day to help us all finish putting it together. Cheers guys!

This is a shot of all the group from the makeover. We all got together for a big group photo at the end of the shoot, and it’s a lovely picture.

Wimbledon was on the TV while we were filming, so naturally we were eating strawberries and cream. I’ll have a bit of that! Lovely.