Love Your Garden series 4 episode 7: Behind the scenes photos 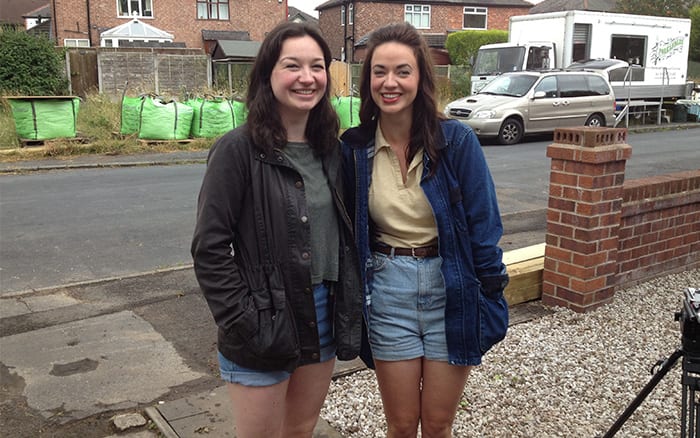 Here’s Frances with her sister Charlie. They do look very similar. When Alan was introduced to her, he said “I used to work with a Charlie!” I replied that it was very confusing, asking Frances to do something and finding out that I was actually talking to Charlie! They had a great day helping out together. In the background you can see bags and bags full of soil, and our catering van which is ready to dish out those bacon butties.

This is Max, who’s in charge of product sourcing on this episode. He’s standing proud with one of these cypresses. His job is to order all the plants, and he’s grinning with relief that something’s actually turned up on site on time! But that smile was soon wiped off his face when he realised he had to unload all those trees.

Here is Frances and Katie helping Max by getting the trees down and carrying them. Kevin is lending them a hand too. I got into trouble taking this photo for you, dear blog readers, because I ruined Steve’s camera shots. He is filming in the background and caught me on camera snapping away with my phone instead of helping. I was in a bit of trouble for that! The things I do for you.

That was a brilliant kids’ summer house. It was fully equipped – it even had a little phone on the wall! The things kids have nowadays. There was also a little cooker and sink for them to play with. It’s marvellous. I couldn’t wait to get in there and, er… make sure everything was working okay.

We had a big discussion over whether or not we should stain the wood, but in the end it was decided that we should. It took ages. And I mean ages. But it did look good, and I’m sure the kids will get loads of enjoyment out of it.

Kevin is always trying to get in on stuff, and here he is doing his best Usain Bolt impression. Frankly, it looks more like he’s trying to direct traffic! All he needs is a lollipop sign saying ‘Kids cross here’. Grant and Alice are having hysterics next to him, and Matt is in the background wondering what the heck is going on!

This is Eleanor and Amy. Eleanor is our production co-ordinator and she does things like our hotel bookings and Amy is the hair and makeup artist. The two of them apparently couldn’t resist getting hold of those trees and giving them a cuddle.

Here you can see the modern special effects for television. We were filming the chat that we do every episode to discuss the garden plan, but the sun was shining too brightly on the table. Fortunately, no expense was spared in finding a suitable solution, and a delightful cardboard box cover was brought in to add a touch of shade! Frances’ sister Charlie and series producer Phil were roped in as box-holders. I had to dash out to take that photo for you.

Here is series producer Phil disciplining Guy, our runner, who failed to bring a cup of coffee to our sound guy Matt in time. You can Matt there on the left, standing with his arms folded. He was waiting ages for that coffee. He is not impressed.

This is a typical scene of direction. I was just about the present a piece to camera about the agapanthus, and I asked where it should be planted. You can see the confusion of pointing arms. Which one should I follow?

I had to take this shot because it meant so much to me. Having dug into horrible, solid clay soils for ages, it was so nice to get to dig in decent soil. It was really easy because it had a high sand content. Alan found out in the end that sand was put in the soil because of the nearby railway line. Back when trains were coal-powered, the coal store would sometimes catch fire. The crew had to jettison the burning coal out of the train, so sand was added to the soil around the lines to make sure the fire didn’t spread. When people bought up the land around the old train lines, they ended up with more sand than they bargained for. Fascinating, eh?

Here is Katie just about to get her dinner. Jon and Shaun are in the background waiting impatiently for their turn. We always have good grub from the catering van – it keeps up going when we are doing these makeovers with impossible deadlines.

This is a cracking shot. I was asked to do some work inside the summer house, and I was really pleased because it was pouring down with rain outside. I took a photograph because I was inside, nice and dry, while poor Alan was out there getting soaked while the sodden crew are filming him. In the background you can see all the Frosts guys keeping dry under that gazebo. But I wasn’t laughing for long because I was soon called outside and I got soaked too.

This is a great shot. Steve called us all together for a group photo. Frances, Alan, Katie and I started nonchalantly leaning on the wall. Unbeknownst to us, Steve ran around the back and photobombed us! You can see him there, stealing the shot by jumping in the air. Disgraceful.

Here are the guys from Frosts having a rest at the end of the makeover. They were absolutely tuckered out. I normally sort them out with a glass of something when I’m getting the champagne ready for the family, but as you can see someone has already been round and given them some cocktails. Look at the cheeky smiles on their faces! There’s Sam, Shaun, Jon, Matt, Martyn and then that other guy. He’s new.

Here is another picture of the new bloke. He came to help us – he’s in charge of Frosts things. He hadn’t done a TV makeover before, and here he is looking up at the heavens and asking, ‘How the hell did I get involved with this lot?’

Look at the state of my hands! They are filthy. What I normally do when I get the bottle of champagne is to give it a really good shake ready to pop it open.

It seems funny but out of the whole garden that we built for them, the girls absolutely loved those little mounds that we made for them to climb over. It was really moving to see them enjoying the garden again. They were also very intrigued by that camera that was filming them.