Love Your Garden episode 4: Photos from behind the scenes

Take a peek behind the scenes of ITV garden makeover show Love Your Garden. 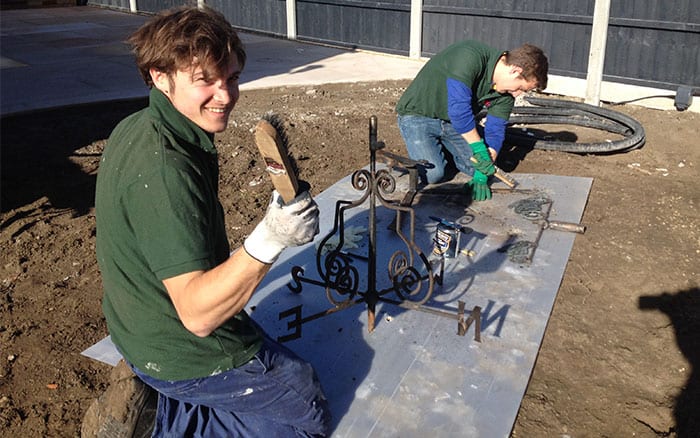 1 The first picture this week is of Guy with a brush, cleaning up the weather vane. It’s a mucky job and he’s just the guy to do it. It’s nice to see him without any fence stain on his face, although it is all over his shirt!

2 In the foreground here is series producer Colin, just checking his notes with cameraman Simon. This is the part where we are filming the delivery of all the topsoil. We are trying to negotiate filming and delivery with that busy traffic at the side.

3 Here I am with Frances and Katie. We are sporting our high-vis jackets to have a bit of fun controlling the pedestrians while we were unloading the soil. I have to say, I think the two-piece high-vis outfit that Frances is wearing is perfect for her on a night out. She looks very glam.

4 Next is series producer Colin who is just setting up our introductory shot. It’s where the trolley was wheeled away by Frances and I while Katie was in the middle. Colin gets very creative during these shots and they always looks stunning.

5 This is Sam and Kevin from contractors Frosts Landscapes carrying some plants in. Kevin had the ‘bright’ idea of carrying them on his head, but that didn’t last long. They fell off just a few steps nearer to that fence. And that’s why you’ve got arms, Kevin. For carrying things.

6 Next shot is Sam cutting open a bag of soil while the crew film it tumbling to the ground. We put tonnes and tonnes of soil into this garden. In the foreground you can see Simon with the camera and our head soundman Matt. And in the distance is Katie, wheeling in a barrow load of flowers.

7 This is our sparkie, commonly known as Jurassic Spark! He has got a great sense of humour and can wire up the most impossible things, including the lamppost in this garden.

8 Meet our big boss – executive producer Matt. He is a very keen cyclist on a serious level. And he builds his own bikes! He decided to put his skills to the test to transform this old bike. But he realised he had bitten off more than he could chew. What started off as a bit of fun quickly became hard work. Still, that amused Frances, Katie and I.

9 Here is Kevin ‘driving’ our car seat and Matt taking a well-earned snooze on the bonnet. It’s a good job we kept the suspension in that car.

10 Everyone has gathered around Alan here doing a piece to camera. Notice that we have to stop nearly all work for the soundman. This is one of the hardest things in a garden makeover – we have to stop work to get the best shots for TV, but we want to push on and create the best garden possible. It’s a balancing act.

11 Finally it’s lunchtime. All the glamour of television, eh? We eat our food sitting on Hippo skip bags, garden walls or even like Katie over there, by the Portaloo. Lovely. Those interior designers from home makeover shows don’t get any of this. They are all warm and cosy inside – so pampered. We gardeners are made of tougher stuff.

12 This is a lovely shot of Simon and Frances relaxing on the car seat in the sunshine. We loved that car seat – it’s something a bit different. You can see my exhaust pipe planting in the foreground and that gorgeous blue sky overhead. A moment of calm in makeover chaos.

13 Here are Alan and Katie putting on the hub caps while Stef the cameraman is moving into position to capture all the action. I thought those hubcaps were great fun and gave the garden real character.

14 This is a classic shot of what it’s like behind the scenes of Love Your Garden. Here are our two soundmen, Matt and Lloyd inside in the shade of the garage. They are taking it easy while everybody else is outside digging and planting and getting scorched by the sun.

15 This shot is just to show you the trouble we have with hoses! It is taken towards the end of the makeover, just as we are about to put the turf down. Poor Katie is trying to wind hosepipes around the camera crew, workers, plants, barrows and other stuff – it’s almost like a garden ballet. Except not half as graceful.

16 I love this picture of the finished garden. I thought this garden had a great deal of character and personality. That Rolls Royce you see in the distance, where Alan is walking past, even looks like a real car. It was a marvellous garden and great fun to build.

17 Meet all the motorcyclists that came up to see the big reveal. There are some cracking bikes in the foreground and I was in my element – I’m a motorcyclist myself. It was great to see these classic bikes all together.

18 Here is a shot of Katie and I taking a selfie in the sunshine now the garden is finished. We were really tuckered out after doing this makeover, but we still had a smile on our faces.

19 Frances is grabbing one last cupcake before she jumps in the car to go home at the end of the shoot. You need all the energy you can get for the long journey home.

20 Here is Sam with a glass of bubbly. He looks so relieved that the episode is over because he can finally go home. He earned that drink – all the Frosts Landscapes guys worked so hard with us on the show.

21 Finally, here is a photo of everybody enjoying the party in the finished garden. And you can see soundman Matt reaching over the crowd with his boom mic, trying to capture the action without hitting anybody over the head.

Hope you enjoyed another great episode! Let me know what you thought of the garden.

Check out the before and after photos and see my Get the Look blog for the planting list!