Love Your Garden episode 8: Photos from behind the scenes

Go behind the scenes of ITV Love Your Garden! Here’s all the action from the series five finale. 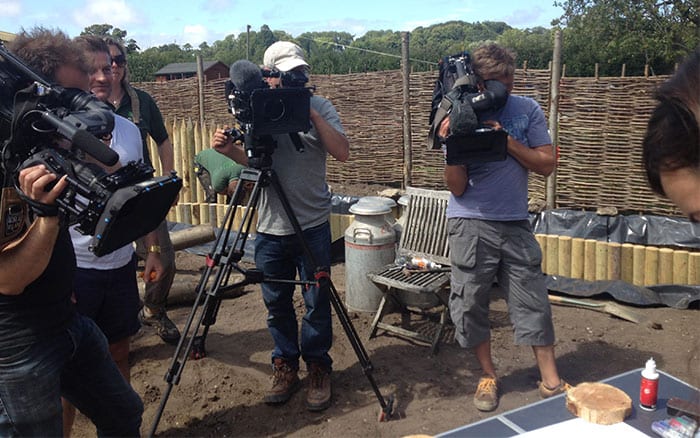 1 Here’s the cameras getting ready to film Alan, Katie and I discussing the plan as we start developing the garden. We do a plan at the beginning of the show and we keep going back to it, making sure we are all on target. Here we are with our three cameramen all in position.

2 Shock news – Kevin has had a haircut! Blinking heck that’s short. The problem with Kevin is that he fails to tip when he goes to the hairdressers, and this is what you end up with. He’s had it cut especially for the blog fans, so feel free to print this picture off and put it up on the wall. You’re welcome.

3 Ah, a chance to put my feet up! When this tunnel arrived we had plenty of fun with it. I’m actually sitting on my sound pack here that is attached to my belt. Not very comfy.

4 We filmed a brilliant sequence with Frances, Katie and I all looking through this tunnel like Charlie’s Angels. In the end it wasn’t used but here is director Natalie, cameraman Simon and soundman Lloyd doing their version of Charlie’s Angels.

5 As we were filming through the tunnel, notice the ingenuity of cameraman Simon. He’s using the logs that I’ve just cut as his tripod. What a cheapskate!

6 And here I am being James Bond! Any excuse to practise my 007 moves. We had a lot of fun with that tunnel before it went into the garden, I can tell you!

7 Here is Sam and Kevin trying to do a shot as if they are the Kray twins. At the back is director Hayley as the Kray’s sister. She is not going to be happy when she sees this photo on the blog!

8 For all you Sam fans, here is Sam on the left and his understudy Marcus on the right. Cameraman Michael is there in the middle just as we are all starting the landscaping.

9 Here is Alan inside the bar – it’s a marvellous feature. I loved it so much, I’m going to create one for my own garden. Everyone is on their best behaviour because the man in the white t-shirt at the back is Matt, our big boss. And I’ve just been caught taking photos for the blog – I’ll be in trouble for that later!

10 This is a brilliant shot. Alan is on top of the mound, spade in hand as he oversees the garden makeover. He’s the king of the castle! You can just see Kevin’s head as he comes round the corner with a bag of cement on his shoulder.

11 Marcus and Kevin are tucking into some chicken. At the end of the day, the team usually bring us a bit of sustenance. It seems generous, but it’s actually a cunning ploy to keep us working late into the night. Small offerings for such hard work.

12 I have to admit, as soon as I saw that bed I thought the feature would never work. But you know, when it was done and in position I thought it looked great. It’s very comfortable and a quirky bit of fun – I was pleased to be proved wrong.

13 Here I am with my cycle helmet on before I do the biking scene. Talk about being put through my paces! We did some quite death-defying stuff during that scene and I loved it. Anybody who lives in the area can use that Olympic bike track and it is amazing fun.

14 As you can see it’s pouring with rain while I’m filming this. I’m cycling around getting covered in mud and the rest of the team is watching from under umbrellas and waterproofs.

15 The camera crew are filming the swimming pool that I visited. It’s a beautiful pool at a hotel and it really worked in the sloping landscape. It looked the business.

16 Here is Katie with a meadow on the back of a lorry. This the meadow turf we used. They send a whole articulated lorry to deliver a meadow. It’s a field on the road.

17 This episode is the end of the series so we took plenty of selfies. Here is one of me and the girls. At the beginning of the year we were all very pale but now we have all been burnt by the sun! We often get in trouble for not wearing sunscreen, and you can see that I’ve caught the sun a bit. Ouch.

18 Here he is: Storm Bringer! I mentioned him in the previous blog because whenever he’s about, it rains. It was a boiling hot day and he was hoping to get rid of his reputation, but look at those black clouds in the sky. Sorry, Storm Bringer. There is no getting away from that nickname.

19 Here is Matt laying down the turf. He’s a real grafter. He puts everybody else to shame. He’s down on his knees getting on with it all the time. It’s such a pleasure to work with him.

21 You can tell it’s the end of the series! Sam, Kevin and Sam are testing out the bed and having a well-earned rest. Well if it can take all that weight, it must be strong enough for the family.

22 Here is the little tractor I created for Luke. It was a hefty log to cut through with the chainsaw. But I was so pleased to see his face when he saw it! I hope it brings him a lot of fun.

23 This is the finished bar area. It was a marvellous idea and I hope the family get time to create some really special memories there.

24 Of course, even though we’ve finished the landscaping, the job doesn’t end there. These are our editors who do a phenomenal amount of hard work. They sift through two solid days’ worth of filming and condense it into a one hour show.

25 And that’s not all – once the editors have done, it then goes over to the sound studio. They make sure the narration fits everything we’ve got and add the music. They do a fantastic job.

26 In fact, I was so inspired I thought I’d have a go at mixing some sound. “But David,” they said. “You’re not a DJ. And that’s not a headphone – it’s a computer mouse.” Honestly, you try and give people a hand…

27 To finish these blogs from behind the scenes, here is the whole Love Your Garden team together. Katie and Frances are leaning forward so you can’t quite see Alan on the bed. I can’t believe it’s the end of another series!

But don’t be too dismayed – there is a wildlife special coming on next week!

See the before and after photo gallery of the garden here