Love Your Garden Series 4 Episode 3: behind the scenes photos 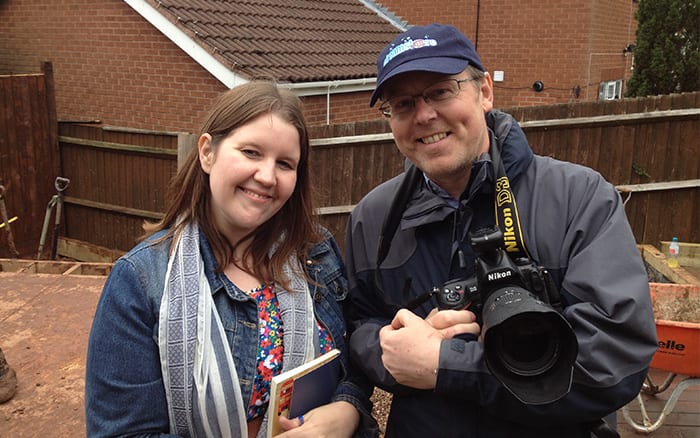 These are the guys from TV Times that came over to interview us. I hope you all picked up a copy – it was a brilliant article and had some great photography to go with it!

Here’s a photo of just what we were up against on site. It rained non-stop and the soil quickly turned to sticky mud. Not only does it make everything damp, cold and miserable, but it’s also really slippy, which slows everything down. It’s just not a comfortable thing, so we removed it when the rain stopped.

This is how wet I was.

Here is Ben with Natalie, who has got her foot stuck in the mud! It had rained constantly and turned to sticky mud! The first day on site is usually a nightmare trying to get the groundwork in. It’s just as chaotic as it looks.

Natalie is also quite a good stylist, and put some of that troublesome mud to good use – by making a mud face of Martyn. I think the resemblance is striking!

Here’s Ben really getting down and dirty! Everyone gets caked in mud on Love Your Garden. Here he is getting those important shots under the decking framework, where we’re going to put the hot tub.

This is a good indication of how much soil we took out of that garden! We ended up shipping out a good ten bags full. We moved tons and tons and tons of soil. It was just so muddy. Unfortunately, it was my suggestion that we take it out, which didn’t make me very popular!

Here’s how the shot was done with the mud in the wheelbarrow. As you can see, Kevin from Frosts is pushing the wheelbarrow, and the camera is actually sat in the mud! Luckily, it’s not an expensive piece of kit, right…?

Here’s a shot of Alan to show how you’re never alone on Love Your Garden. When you’re digging, eight or nine people are standing watching you.

Alan was getting a lot of stick for his super clean wellies! But it turned out that his old wellies, which were covered in years’ worth of mud, are currently in the Garden Museum near Lambeth. So it wasn’t that he had been skiving off! He’s busy breaking those new ones in now.

Here’s a shot from where I am, digging in plants in the corner. I can see Katie across the garden in the rain, starting to plant up one of the first raised borders. It always feels like an uphill struggle when the first border goes in, because you realise just how much planting there is still to do.

This is a great photo of Katie and Frances. Katie has just heard the bad news – we’re going to have to work until at least 9pm tonight to get everything done! She doesn’t look very happy about it.

But it’s not all bad – I got a special mug. Cheers, guys!

Here is a fantastic shot. We’re just doing the handover when we let the family into the finished garden. Steve in the background is drenched to the skin, and this cheeky chappy is producer Phil telling me to stop taking photos for the blog and enjoy the party! I hope you appreciate the sacrifices I make for you, dear readers.

Here’s Alan and the family – everyone wants a photo with him! Alan stays behind when the garden is finished to take hundreds of snaps and selfies with the family, their friends and relatives, and the neighbours. He’s always very accommodating and the family were very deserving of such a great makeover.