Love Your Garden series 4 episode 8: Behind the scenes photos 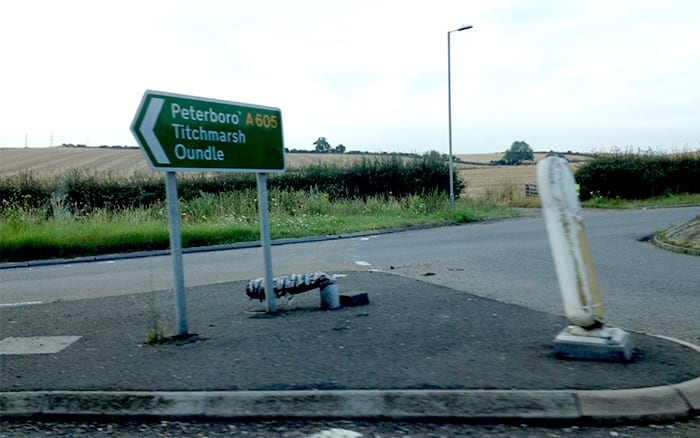 I’m on my up to Wisbech in the car and I’m not sure which road to take. Then I see this sign, and I know I’m definitely going in the right direction.

Here is a picture of the hard landscapers on site. This is before the rest of the crew arrive, and we are getting the area ready. The problem is that there were a couple of horrendous thunderstorms earlier on in the week that seriously hampered clearance of the garden.

I’m looking at this realising that we are dramatically behind schedule. Just after this photo was taken, we discovered a load of underground drains that put us even further back. It was really stressful and very hard work.

Here we can see Natalie, one of our directors, using a cheeky finger to rewrite the sign longmarsh ltd to titchmarsh ltd. In the end she wiped it off – she didn’t want to get caught doing it. Too late!

With a camera that big, you can’t even see Katie’s head! Every time there’s a camera left out, she grabs it. I think deep down, she wants to be a camera operator. She would do a brilliant job, but she needs to build up her muscles first to lift cameras that size!

Here is a very sad picture. At the beginning of the series, Kevin had brought one of these expandable gazebos in his car boot. On the first episode when it rained, he said ‘don’t worry, I’ve got a gazebo in my car.’

He used it for every single episode, but on the last shoot there was a gust of wind – and it was wrecked! I’m sure he got his money’s worth out of it. Whether he gets the money back from production is another matter.

This is our immensely enthusiastic series producer Phil, getting stuck in. We had to tell him that you don’t in fact prune a fence panel. Stick to the hedge, Phil. But it’s all part of his training and I’m sure he will pick it up bit by bit.

I love this shot. While we were in the garden, we heard an ice cream van coming around the corner, so we commandeered it and used it for a set. Here is a great photo of myself, Katie and Frances queueing up for a sweet treat – make mine a 99!

This is the lollipop I ended up with. I chose it because I felt it looked a little bit like Alan Titchmarsh! It was half expecting it to tell us to get a move on. However, I was concerned that the nose looked like less like ice cream and more like a stray pea from the freezer. But we had a bit of fun with it and it went down a treat.

This is a lovely shot. In the foreground we have Shaun, who is one of the carpenters, and Thea who is managing all the product for this episode. To her left is Martyn, the lead carpenter. In the background is a couple of cheeky faces – Andy, Alan’s driver and researcher Helen.

Natalie, one of our directors, is an excellent cake maker. She made us this amazing creation with the four presenters on top. We were absolutely blown away by it – she did a brilliant job and it looked marvellous. And it tasted marvellous too.

In the evening we went to do a quiz. As you can see, Alan and Frances are really getting stuck in. Alan is a walking encyclopaedia – I’m telling you he knows everything! The moment the question was asked, he started scribbling answers down. You can see Kevin in the background there trying to sneakily listen in on some answers for his team.

Here you have Shaun and Martyn the carpenters. They have been wearing Frosts Landscapes uniforms, but just like Superman, they expose themselves as being from Mills Carpentry, Building and Maintenance! These two are a great team and have done a phenomenal amount of hard work in every episode.

This is a shot of me with the bowling guys at the Essex County Bowling Club. During the programme I had to bowl one ball on camera. I’d never done it before, and I couldn’t believe it – straight over by the jack! They reckon I didn’t do too bad a job. I’ve got to say, I think I’ll be taking it up in the near future. Thanks for the warm welcome at the club, guys.

Here I am with our director Alice, who had just bowled her own ball. It was miles out, and nearly knocked the ankles off a pensioner over the other side of the green! I was extremely embarrassed to be seen with her.

Here’s Katie having to get a load of paint off her coat. She got too close to that fence panel! As you can see, Amy the makeup artist is giving her a hand to clean herself up.

Here are all the Frosts Landscapes guys. Starting from the far left and going clockwise you have Matt, Martyn, Sam, Kevin, Dan, Jon and Shaun. They grafted phenomenally during the series, and they have a great sense of humour. They are really positive, professional people and it’s been a pleasure to work with them.

This is it – the group shot! We’re out the front of the garden, and some people have just got an ice cream. It was marvellous fun, and great to see everybody together. I think it really sums up the spirit of the whole show.

Would you believe it – the family also made a cake with us four presenters on it! We were overjoyed, having two great cakes on the same day. It’s another great triumph of cake design, so thank you very much. I love the bark chipping, and I’m even at the bottom laying down chocolate decking.

This is me doing the voiceover for this episode in the studio in London. Through the glass you can see our director Phil, and more importantly in the back is the main dubbing mixer, head of sound Kate. It’s always a pleasure working with the team at Director’s Cut that assist with the production of the whole series of Love Your Garden.

Here are more unsung heroes – these are the editors. These guys and girls are the people that put the programme together. They distill hundreds of hours of filming down into eight one-hour episodes. They have a great sense of humour. Here is Giles, Chris, Ann, Dave and Chris. It’s always a pleasure working with you, and I look forward to our next filming project.

This is the final shot that I think sums up everything about the last episode. All of us were completely tuckered out. Here is Sam, Lying on his back, head in his hand, so relieved that it’s all over. Yes Sam, you can finally go home!

Well, dear readers, I hope you’ve enjoyed all the blogs that we’ve put together for you. I’ve certainly enjoyed taking the photos for you. I hope you’ve had a chance to see the fun, energy and hard work that goes into making Love Your Garden, not just in the landscaping and planting but also in the production, sound and editing too. It’s been a thoroughly enjoyable experience and we look forward to next year! Thanks everyone.