As you probably know, I love wacky plants. I’ve already talked about my favourite plants from Chelsea, and the best black plants, but I’m always on the lookout for unusual and quirky plants. It’s great to try something a bit different, and I had to show you these beauties! 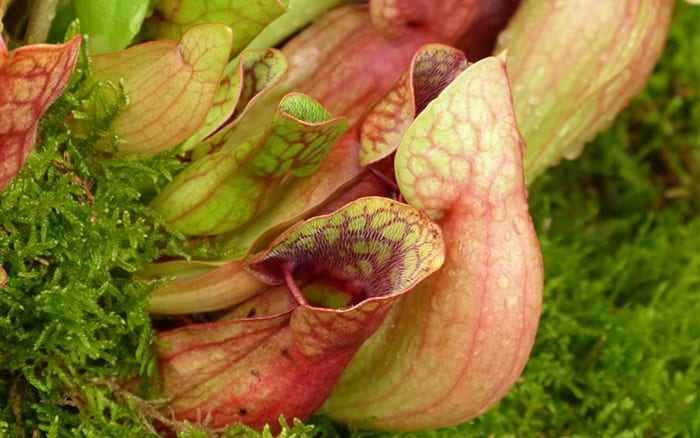 This is a fantastic meat-eating plant that digests the insects that fall into its little pitchers on the ground. It also has weird-looking flower heads!

I love this plant. It looks like it has flickering orange flames coming out of the flower head! Its textured green foliage means it would look great in a bright garden border.

This is a great carnivorous plant that is native to Australia. Its name comes from its leaves, which are divided in two like a fork in the road.

Also known as the Himalayan Blue Poppy. Its colour is such an unnatural shade for a flower, and it would make a great addition to a cottage garden or summer flower bed.

How snazzy is this? Its name comes from the Greek for spear, ‘aichme’, and it makes a fantastic houseplant.

Irises come in a huge range of colours, but I’ve never seen this one before! It’s a pale gingery-brown and lilac, which gives it a really odd look.

This is an incredible species of true ginger, often known as the beehive ginger because of its hive-like shape.

Often called a slipper orchid, cypripedium means ‘Shoe of Venus’ in Greek. There were some exceptional varieties, but I liked this mottled pink one best.

It’s actually a variety of garlic, known as serpent garlic. This plant has amazing stems that twist around and point all over the place! It’s actually about 40cm tall.

This is a great flowering shrub with fantastic flowers. This one in particular has bold orange petals – it would stand out in any garden!

It’s one of those plants that makes you just want to reach out and touch it. Grasses are so underrated – they give your garden great texture.

This incredibly flower also wins the title of ‘My favourite plant from Chelsea 2014’ – the next best thing to a gold medal! It’s just such a bold flower. I’m already planning to plant some in my garden!