Plants! I love them. There are hundreds of amazing, beautiful species all over the world. From the smelliest flower, the oldest tree or the most deadly we should celebrate and appreciate them all.

The corpse flower also known as amorphophallus titanum is a flowering plant with the largest unbranched inflorescence (the complete flower head of a plant including stems, stalks, bracts, and flowers) in the world. However, looks can be deceiving as this purple beauty emits an odour of rotting flesh. If you were brave enough to go exploring, you’ll find them growing in the rain forests of Indonesia. 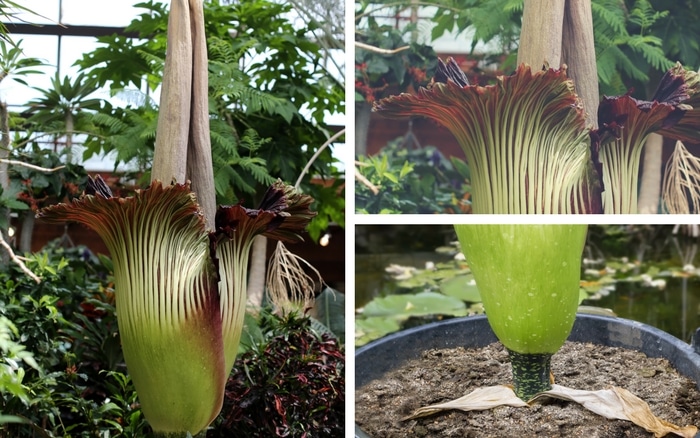 Scientifically known as balfourianae, bristlecone pines are found in California, Nevada and Utah. These trees are thought to be the oldest living organisms on the planet. The oldest-known to date is more than 4,700 years old.

The deadly nightshade or atropa belladonna may look enticing but do not be fooled. It is highly dangerous, when consumed and even touched. It can cause it’s victims to have hallucinations and in some extreme cases paralysis. Before the middle ages, it was used as anaesthetic for surgery, poison and rumoured to play some key parts in murders.

Aristolochia grandiflora more commonly known as the pelican flower. It’s native to the Caribbean and central America. Don’t get too drawn in by it’s beautiful deep purple colour and intricate patterned veins… otherwise you won’t shift the smell of dead mice. It uses its stench to attract pollinators, mainly butterflies!

The strangler fig, ficus! A group of viscous vines that engulfs it’s victims by strangling. It uses other trees and steals their nutrients to continue to grow. Often leaving the support to wilt and die. Amazingly, there are close to 1,000 different species of Ficus. Which can be found in every major rain forest, tropical continent and islands all around the world.

Native to North Africa, the dragon’s blood tree or dracaena cinnabari is one of the coolest looking trees around. It’s sap resembles dragon’s blood being deep red and the canopy acts as an umbrella to shade the roots. The resin has many purposes and is still used today in medicine, incense, varnish and dyes.

Rafflesia arnoldII is the world’s biggest flower. Each bloom is 3ft/91cm wide and it can weigh up to 1.7 stone or 10kg. Unfortunately, it’s also known as the Stinking Corpse Lily due to its horrible scent definitely not something you’d give to your loved one. They are very rare and grow in rain forests in Borneo.

Slipperworts are a perennial plant scientifically known as calceolaria uniflora. Found in the southern part of South America, these bright yellow ‘cuties’ grow only 10 centimetres or 4 inches tall. Some people have said they resemble that of an alien due to their odd shape. In my view a close encounter worth having.

The Roots of Groot