Trees. Flowers. Gardens. You know what to expect from Chelsea. But if you look closely, you’ll see there’s more to the show than first meets the eye. Here are my favourites. 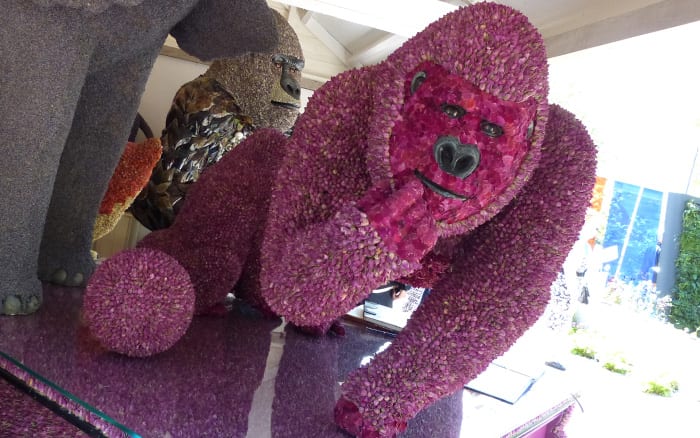 Hardly a staple of British gardening. I saw a huge gorilla statue covered in delicate pink rosebuds lying on a piano, with another just behind it made of black mussel shells.

In a similar vein, check out this six foot dinosaur! Those are some pretty sharp shell teeth!

You can’t tell from the picture, but this robot’s arms move up and down, and its eyes flash. It’s great fun – I think every garden should get one.

Stone dogs are a regular sight on garden gates, but I like the twist on these – metal leads. Surely a guard dog on a leash is much less threatening than one that’s free to chase you!

A brightly coloured metal bull statue is already an odd thing to see at Chelsea. But one filled with beer is really different. And also a great idea.

We’re used to seeing plants on walls, floors, stands and even people at Chelsea. But this year we had plants hanging from the rafters too! There was a lovely Hippeastrum ceiling inside the marquee, and a display of bulbs suspended on string.

Perhaps the most unexpected thing was this pair of orange and silver loafers, spotted on the feet of a very dapper gentleman. Because it’s not just about the gardens, you know!