St. Patrick was born in Roman Britain into a wealthy family: his father Calphurnius was a deacon, his mother Conchessa was a relation of St. Martin of Tours and his grandfather was a priest. At the age of 16, Patrick was kidnapped by Irish raiders and taken back to the west coast of Ireland, possibly Mayo, as a slave.

According to his later confession, Patrick escaped from his master after God told him in a dream to flee his captivity. He returned to Britain and began studying to be a priest. In 432, he returned to Ireland as a bishop to spread the message of Christianity and convert people away from paganism.

He founded 375 churches across Ireland, each of which contained a school for teaching the practices to the next generation. After his death in 461, many people made pilgrimages to St. Patrick’s Cathedral in Dublin.

Did you know? There is no consensus over exactly what is a “true” shamrock. Opinion is divided mostly between two species: the lesser clover and the white clover. 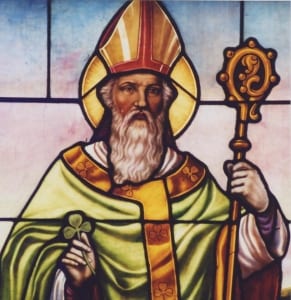 St. Patrick’s Day became a national holiday in Ireland in 1903, and feasts, festivals and religious celebrations are held across Ireland and the rest of the world every year. People wear green and attach shamrocks to their clothes.

The Lenten restrictions on consuming food and alcohol are also lifted for the day, which has encouraged the party atmosphere.

According to legend, St. Patrick used the shamrock in his preaching as a metaphor for the Christian Holy Trinity: the Father, the Son and the Holy Spirit. Today the shamrock is used to symbolise both the saint and Ireland more generally.

Interesting Fact: Last year even the astronauts in the International Space Station celebrated the day by wearing green.