Across London, the Royal Parks have stood as monuments to the beauty and landscape of the quintessential British garden. While you may be forgiven for thinking they have always been open spaces of kept lawns and pretty flowerbeds, this has not always been the case.

During the First World War, the Royal Parks played an important role in the war effort and many were temporarily transformed to meet the needs of the military between the years 1914 and 1918.

He informed me that during the First World War, the lake was drained and a number of buildings were constructed on the lake-bed for the government, which contained the Ministry of Shipping and the War Pensions Office, because they simply didn’t have the space for all the new staff that were required to wage a war. 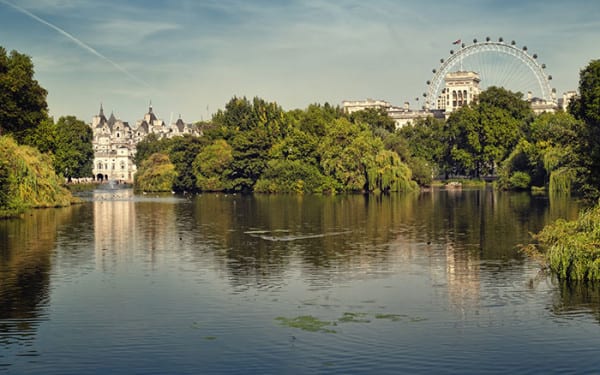 Other Royal parks served many purposes. For example, at Kensington Gardens, a camouflage school was built in 1916 to discover the best ways to camouflage trenches and other significant objects from the prying eyes of German aircraft. Artists were employed to come up with exciting new camouflage designs and volunteers spent endless hours making papier-mâché soldiers to test out these new schemes.

A network of trenches were also constructed on what is now the Italian Gardens. This served as an imperative way of teaching soldiers how to build and improve the trenches that would be protecting them once they went abroad to join the fight.

Similar projects were being tested in Richmond Park, where there was a large bombing and experimental ground at the disposal of the government. Mike told me that “the author H.G. Wells was actually conducting experiments in Richmond Park.”

He had come up with a design in which equipment could be transported over rough terrain and trenches using an aerial ropeway, so that the supplies didn’t have to be laboriously dragged through mud and craters. Unfortunately, these innovative designs, for the most part, came too late in the war effort to make anything other than a small impact, but the account is an interesting one nevertheless.

As well as training soldiers, the Royal Parks were also used for growing food and showing the civilian population how they could grow their own. Model allotments were established in a number of Royal Parks, including Kensington Gardens and Regents Park and people would come and learn gardening techniques and the types of vegetables they could grow.

The grounds keepers had to instruct the public on gardening. “There were model allotments and even catalogues that the nominated person would refer to when describing to the public what they should grow.”

This job was important because the government didn’t want people wasting their time with slow growing or low-yield fruits and vegetables. “The government wanted people to grow food with a quick turnaround, the sort of food that fills you up and could sustain the nation”.

As I look around the allotment, I can see that many of the varieties they are growing here in St James’s Park today, would have been the same grown back during the First World War.

There are potatoes, radishes, rhubarb, parsnips and more—mostly the heartier type of vegetables that, like Mike says, will stop you going hungry. Even the land outside Buckingham palace was used. “They grew potatoes outside Buckingham Palace and had to get special permission from King George V beforehand!”

At Greenwich Park, squabbles erupted between the government and park recreational groups, who were unhappy that their cricket ground was being dug up to grow vegetables. The allotments prevailed, however, and it’s easy to see why—Britain imported a large amount of its food but, with the German U-boat campaigns ravaging British shipping, food had to be sourced on the home front instead.

Not all of the park-land was requisitioned for the war and much of it retained its pre-war purpose, minus the flowerbeds. Kids played in the park and American troops even played baseball in Regents Park. Couples would come to the parks to meet, and this caused a stir among the more morally concerned people of the day.

Female police patrols, a first in the UK, were established to make sure everyone was behaving themselves, and it wasn’t just flirting couples they dealt with—they helped find lost kids and even had misbehaving kids brought to them for a good telling off by concerned mothers!

When war was declared in 1914, many Royal Park’s employees signed up to serve in the armed forces. They were labourers, park keepers and gardeners and by the end of the war, 24 of these men would not return, having lost their lives in the fighting.

The Royal Parks Guild recently exhibited their garden— Battlefields to Butterflies, at Hampton Court Palace Flower Show, where visitors were able to walk through a trench as it would have looked during the war and after the fighting when wildflowers and poppies reclaimed the battlefields. The final part of the exhibit was a plaque, dedicated to those 24 park employees who were killed.

The war affected people from all walks of life, and horticulture was not exempt.

This year, as we reach the centenary of the armistice that ended the conflict, we shall reflect on those who gave their lives and ensure that they are never forgotten.

In my final blog, I shall be exploring how horticulture is helping those who are returning from combat today and the continuing impact horticulture-related activities have on serving soldiers.

For more about the armistice, check out my blog:

Or check out my Pinterest board, for gardening ideas: