Behind The Scenes – Love Your Garden 2017: Episode 9 – Nottingham 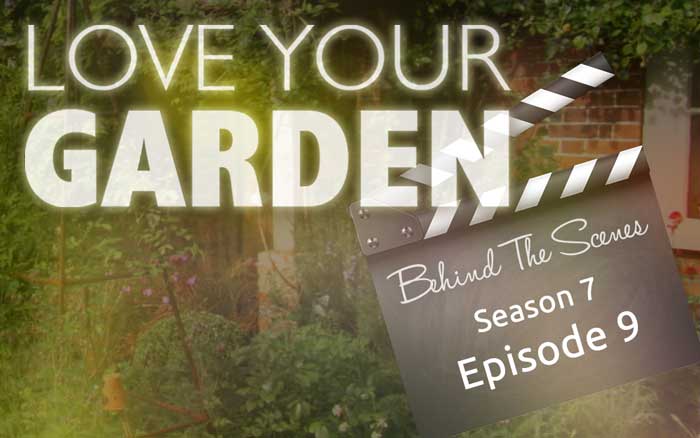 For this week’s episode the team and I went to Nottingham to surprise inspirational boxing coach Marcellus Baz with not one, but two garden transformations. Katie headed over to turn a tiny alley next to his Gym into a productive kitchen garden, while the rest of us created a stunning Moroccan-inspired garden at his home.

Here you can see the long, long line of terracotta tiles that we ran through this garden. There’s something about terracotta – I love the warmth it brings to a garden. But that was a lot of paving we had to get down at the beginning of this garden, and we kept getting stopped by rain too, however we did manage to get it done in time.

Here is our producer/director Jake, take a well-earned rest on top of a comfy bit of polystyrene. It may look like a joke, but he really was asleep!

Our director Jonathan is having a go at cutting the polystyrene here. It always look easy, and it feels easy to begin with, but as the saw starts to get embedded and compressed in the material, you soon find out that it’s harder than sawing through a sleeper!

I was well chuffed with these exterior tiles that I added. The random effect of the tiles really added some character and it turned out brilliantly. They are also easier to install than you may think.

This is the olives arriving. We had to film the van driving past us and then me hailing him down and him coming back around again. It seemed odd having this elegant, hundred year old olive tree driving around the streets of Nottingham on the back of a van.

There were so many different opinions about the random nature of these tiles – it was doing my head in. I would put down a layout and then someone would come along and say “you can’t have that one there because there’s another blue one here” and so on, and so on, and so on. I had to keep telling them that it was supposed to be random, but they wouldn’t stop giving me gip anyway.

Here is Amy and I just catching up beside the road. We had no particular area to sit and have a rest on this shoot, and we would walk to a little cafe down the road to have a bite to eat. There wasn’t even a tea station set up on this shoot (the horror!), so the only place to stop and have a chat was out by the road.

This is what it looks while we are working in the garden – boom mikes sticking up in the air everywhere, cameras all over the place, it’s chaos when you are trying to get a job done.

At this point we were really beginning to realise just how much stuff had to come into this garden, and with a separate satellite garden as well over near the gym, it wasn’t looking good for an early finish.

Alan is doing a bit of presenting here, and as you can see, when someone is presenting, everyone has to stop working and making noise. This stop/start can become really frustrating when the garden is running behind and you are worried about finishing on time.

This picture of Katie stayed on the boxing dummy for most of the build, and Katie came back twice from the boxing ring before she even noticed it! At which point we all tried to avoid getting boxed.

This professional looking cameraman is actually one of our landscaping team who reckons he’s got the skills. I think he looks pretty good for it actually!

Here everyone is hard at work in the garden, with the electricians there trying to get the glow lights working around the edge. We just couldn’t seem to get this garden closed down and everyone was feeling quite concerned at this point, as there were just so many different aspects to get in place for this design.

This triangular water feature was one of my favourite features of the show this year. I think the blue water against these beautiful tiles and the contrasting terracotta looked absolutely marvellous.

Our director Jonathan here telling me I take too many photos during filming… but I’m doing it for you guys!

Alan testing the swinging bench here. Glad for him that he’s managed to get his feet up for a few minutes.

Here you can see us all looking absolutely tuckered out. This garden was a behemoth to get done, and it was almost dark on the last day before we got the reveal.

Even the cameramen look exhausted on this one, but it is the last in the season after all.

And here you can see the whole team along with the guys from JP Landscapes, seeing out the end of another great season of Love Your Garden.

It’s been an incredible journey with some breathtaking gardens, and although we’re all tired and looking forward to a rest, we can’t wait to get stuck back in in 2018!