Grow Your Own Pak Choi

Pak choi has slowly come to be a supermarket staple in the UK, and for good reason. Known in some places as ‘Chinese cabbage’ or ‘bok choi’, this lovely little brassica has a flavour somewhere between a mild cabbage and spinach. If harvested young you can eat it raw, and it makes a superb addition to fresh salads. When mature it’s an absolute must for stir fries and noodle soups, but it also is a fabulous companion to just about any fish you can think of, wrapped up together in foil with some lemon and seasonings – it’s divine.

As with all brassicas, pak choi is full of goodness. It is a good source of dietary fibre, protein, thiamin, niacin and phosphorus, and a very good source of vitamin A, vitamin C, vitamin K, riboflavin, vitamin B6, folate, calcium, iron, magnesium, potassium and manganese. 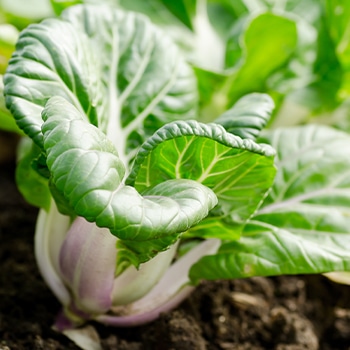 As a garden vegetable they have great versatility; they can be harvested as a cut-and-come-again crop (CCA) or you can wait and harvest the whole thing as a mature plant. They are also great for container growing if you are low on space, because they are shallow rooting. When choosing your seeds, it’s good to remember that green-stemmed cultivars are generally tastier than white-stemmed varieties, although both are still lovely.

You can start sowing your pak choi in April and carry on through July or August. In warmer parts of the country you can grow in partial shade, but as you move north you will need a full sun position. Earlier and later sowings grown for baby leaf can also be made under cloches or fleece in mild areas.

You will want rich, moist soil that is firm, with plenty of well-rotted compost dug in. Sow your seed thinly, 2cm (¾in) deep, in rows 30-38cm (12-15in) apart, depending on your variety. Within the row space your seed 15cm apart for small varieties, 20cm apart for medium-size and 35cm apart for large.

Letting your pak choi dry out will lead to bolting and poor flavour, so water when needed to keep the soil moist through the growing season. Because of their shallow roots they do better with little and often rather than an occasional drenching.

If you have given them good soil then they shouldn’t need fertiliser, however it wouldn’t hurt to side dress crops with compost again around mid-season.

All the usual brassica pests can be a problem, so it’s a good idea to surround stems with a 10cm (4 inch) mat with a slit cut into it to prevent cabbage root fly from getting at the roots. Using fine mesh or fleece over the summer will keep other insects at bay too.

A CCA crop can be harvested at any stage from 4-13cm high. This may only take three weeks, and two or three further harvests should be possible during the season. A mature, headed crop takes around six weeks and can be lifted entirely, or cut 2.5cm above ground level and left to resprout.

Pak choi won’t last long in the fridge – usually a week at best. However it can be blanched and frozen for long term storage.

Grow Your Own Spring Onions

About the Author: David Domoney