Love Your Garden series 4 episode 4: Behind the scenes photos 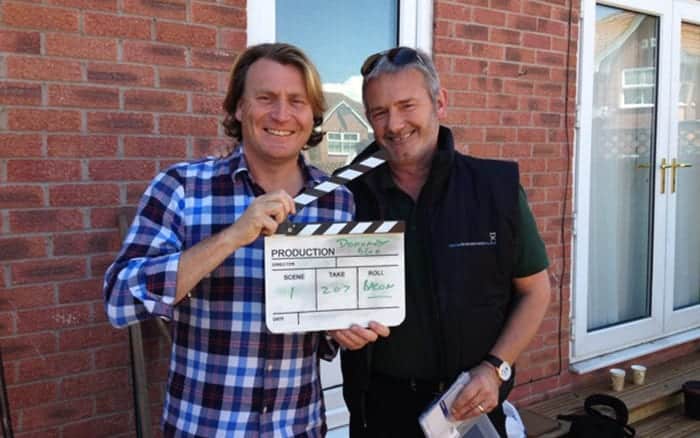 This is Alan, Katie, Frances and myself drawing up the plans for the garden. Stef the cameraman is in the background. We have to film this sequence about three times – one for each different camera angle. This one is at the back looking down on the plan. We always film this in a professional location, um… on a trestle table in middle of the street.

Here we see Shaun down a hole, getting underneath the decking trying to put the lights in. You can see the lengths we go to on these garden makeovers! To the left with the hat we have Sam and to the right is Kevin, as the guys attempt to get everything together.

Next is a shot just after the rain – we had a marquee at the top of the garden, so we all hid under it. You can see the back of Alan’s head, Jon, Matt the sound guy and Matt the landscaper there to his left, as we all get under there to keep dry.

This is Amy Moon, our makeup artist. She’s giving Frances a little touch-up as she sits in a wheelbarrow, as you do. My makeup usually consists of dabbing a bit of peat behind my ears!

Here is Kevin, he’s our digger, driver and heavy plant material guy! The way he can swing those machines around makes an amazing difference to the garden. Though I always make sure my car is parked a few miles away when he’s on that thing, just in case! He does an amazing job carrying the packs in, and he’s quite a character.

Here is Cath, she’s one of our researchers. She put the kettle on, thinking it was one that you put on the stove over a flame. In fact, it was electric, and we had to buy a new one because she melted it!

This is where I planted the tree in the front garden with Frances. The trouble was that as we dug down, we realised there was a huge chunk of concrete under the soil. We had to get one of our hard landscapers, Jon, with a pneumatic drill and break up the concrete and get it out!

In this picture we’ve just had a rain shower, but Alan is out there looking fresh and dry! I don’t know how he does it. He’s putting a tree into position in the garden, and he’s busy explaining all the benefits of that particular variety.

Here is Frances cutting the lawn when we get together for our front garden makeover. There were some marvellous shots in the programme – I love doing front gardens. They’re so important to families and communities, and that’s why I started the Cultivation Street campaign to bring back Britain’s front gardens.

This is the gnome that we found in the front garden. It looked very angry, so when we finished the makeover I drew on a little smile and put him back in the garden. I’m very pleased it made it into the final programme! As you can see there, in between the rain it was a very hot day, and my face is bright red.

Back at the main garden, I found Steve shooting through an old Wendy house that he discovered round the back. He’ll go to great lengths to get the right shot, and here he is really leaning in through the window for the best angle!

Here are two of the Frosts guys having a nosy through the fence! On the left is Kevin, who’s one of the planters and heavy machinery guys, and to the right is Martyn, one of the lead chippies and a marvellous craftsman. They’ve both got a great sense of humour and it’s a pleasure to work with them.

This is Guy, the cheeky runner/researcher trying to steal the limelight! Frances is presenting in the background, and the team is trying to focus on her, but he’s jumping in front of the camera and taking all the credit. What a cheeky monkey!

This is what I see when I’m doing a piece to camera in the garden. It may look like I’m just talking to you on the telly, but actually I’ve got a large live audience! Two cameramen, a director in the front and two sound technicians. There’s another cameraman at the back taking shots from other the fence. From left to right we have Stef, Matt, Grant, Ben, Alice, Jim just behind her and Steve.

Here is Alan doing a piece to camera to sum up the show while all the people are in the garden celebrating. It’s always emotional when they get to see what a difference we’ve made to their garden.