1) The beak of the great tit cleverly changes shape (very slightly) over the year to help it adapt to changes in its food supply from insects to nuts and seeds. 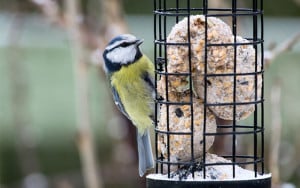 2) Starlings are superb mimics. They can copy the sounds of other birds, and even frogs!

3) House martins migrate all the way to Africa in winter, and then fly back to Britain and set up home in exactly the same nest.

4) Starlings come together at night to roost in enormous numbers. The largest roosts can contain a million birds!

5) Swifts gather flying insects into huge food balls, which contain between 300 and 1,000 insects each. The birds then use them to feed their young.

6) You can tell male and female starlings apart by the colour of the base of the bill – blue for males, pink for females.

7) Back when milk was delivered in glass bottles in Britain, blue tits used to pierce the foil lid and drink the cream. This largely stopped when semi-skimmed milk became popular.

8) Blackbirds love snails, but they don’t know how to break their shells. Instead, they listen for song thrushes that are breaking snails and then rob the spoils. Song thrushes, on the other hand, have special sites for this task, known as anvils.

10) Collared Doves are not master nest-makers – sometimes their chicks fall through the flimsy branches.

11) Blackbirds love to sunbathe! They sit on the ground and spread out their wings to catch the rays.

12) Birds have an incredibly high body temperature of 40°C, which requires a lot of energy to maintain. Birds have to eat enough during the day to keep them alive overnight – if not, they die before dawn.

13) Blue tits are so light, they weigh about the same as a pound coin.

14) Great Spotted Woodpeckers make their distinctive knocking sound by striking a branch with their bills an incredible 40 times a second.

15) Wrens spend cold winters huddling together in nests for warmth. An astonishing 63 wrens were once found huddled in one nest box.

16) Swallows can cover enormous distances during daylight migration – up to 200 miles a day.

17) The jay stashes away about 5000 acorns every season in different hiding places. It can remember all the locations, but often it doesn’t need to eat all the acorns, leaving them to grow into oak trees. Jays are thought to (inadvertently) play an important role in the spread of oak woodlands.

18) Robins love singing so much, they do it all year round. They are normally the first to start the dawn chorus, and the last ones to stop at night.

19) During winter, blackbird couples split up, but as soon as breeding season arrives, the pair up again, often with the same partner as before. Aw!

20) Blue tits and great tits have linked their breeding season with the emergence of caterpillars, to make sure their chicks always have plenty to eat. A very hungry family can polish off 10,000 caterpillars before the chicks learn to fly. Mum and Dad can each fly 100km in total searching for food.

21) Coal tits often purposefully lost battles of superiority over food, so they can hide it for later. They build a winter store of peanuts and sunflower seeds.

22) Dunnocks have one main partner for life, but they also have many other mates on the side. Females are just as likely to have affairs as males.

23) During late summer and autumn, birds moult. Blackbirds are very embarrassed by this, and hide themselves away until their new feathers grow, leading people to think that the birds have disappeared.

24) British robins are not afraid of humans, often coming quite close when we’re gardening in the hope that we’ll turn over the soil and expose tasty grub for them. European robins are not so brave.

25) The tit family spend most of their lives looking for something to eat. The great tit spends around 75% of its time searching for food. For the blue tit, it’s more like 80%, and for the coal tit it can be 90%!