How to grow your own potatoes in the veg plot

Potatoes are a brilliant crop for beginner gardeners and practised vegetable growers alike. Get your own potato crop in the ground this year to start enjoying home-grown spuds!

Potatoes grow from special seed tubers instead of seeds. Buy them from your local garden centre – they have been cleared of disease and bred to produce strong, viable plants. 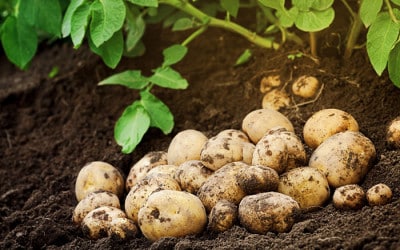 There are three types of potatoes, earlies, second earlies and maincrops. The names refer to the time they are harvested.

Earlies are the easiest to grow and take up the least space in your garden. But the other two are simple crops and will give you loads of potatoes.

When to plant potatoes

Potato crops need different planting times depending on the exact variety, but here is a rough guide.

How to chit potatoes

You’ll need to prepare the tubers before planting by chitting them. Don’t worry, it’s not difficult! They need to sprout before they go in the ground.

Stand them rose end up (that’s the end with the most eyes) in an old eggbox on a cool, well-lit windowsill. The eyes will sprout naturally, and the tubers are ready to plant when they are about 2.5cm long.

How to plant potatoes

Potatoes grow best in sunny spots that are not prone to frost. Dig a narrow trench about 13cm deep and line it with peat-free compost, general fertiliser or even grass clippings.

Space the seed tubers about 30cm apart for earlies, 38cm for second earlies and maincrop. If you’re growing in rows, leave 60-90cm between them and plant with the shoots facing towards the surface.

Handle the tubers carefully – the shoots can be quite brittle. Press over the soil and let nature do her work.

Remember, it is vital when the shoots begin to emerge from the earth to keep them as far away from the tubers as possible.

Bank up the earth over the emerging shoots, forcing them to grow up and away towards the light. Repeat until the shoots and ensuing leaves are well removed from the tuber.

Once the potatoes have begun to grow underground, your plants will need lots of water. If you have a dry spell, water regularly or your spuds will be stunted.

How to harvest potatoes

fresh organic potatoes in the field

Early varieties should be ready to harvest from June. I lift mine when I see the flowers. With earlies you can simply dig up and eat.

Second earlies and maincrop will stay in the ground a bit longer and need a bit more attention.

Two weeks before you want to lift them, cut off the growth at ground level. This gives their skins more time to toughen up.

Harvest second earlies in July and August, and maincrop varieties from late August to early October.

Harvesting is easy with a fork – just tease them out, being careful not to spike them. Now you’re ready for some home-made chips!